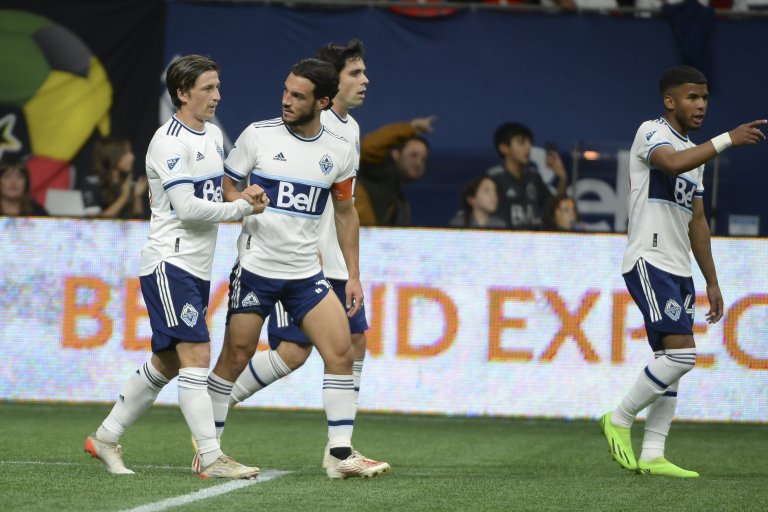 It’s Decision Day in MLS on Sunday, October 9, the last day of the MLS regular season
Orlando vs Columbus, Minnesota vs Vancouver and Real Salt Lake vs Portland are all win and you’re in games
Get all the of the MLS odds and MLS picks for Decision Day here

We’re almost ready to put a bow on the MLS regular season. Just one weekend remains with Decision Day going down on Sunday. All 28 teams will play with plenty to still be decided. We break down MLS Week 34 and give our best MLS picks here.

There is one game left for all teams on Sunday. All Eastern Conference teams will play at 2:30 pm EST. While all the Western Conference games will go down at 5:00 pm EST. LAFC are the favorites in the MLS Cup odds and have clinched the Supporters’ Shield.

But the top spot in the East, home field in Round One, and four teams currently out of the playoffs, two in each conference, can still finish the weekend with a ticket to the MLS Cup Playoffs. Among the many things to be decided on Decision, three games are straight-up win and you’re in matches.

Last week saw some strange results and we didn’t fair too well. Toronto and Miami was almost 0-0, the Union got rocked in Charlotte, Cincinnati lost for the first time in ten games, and the Loons no-showed with the playoffs on the line to name a few. We went 1-3 last week, bringing the season record to 70-53, +8.78 units.

Read on for the Decision Day odds and our MLS picks for this weekend below.

Despite having nothing left to play for on Decision Day, LAFC are heavy favorites this weekend at -167 odds over Nashville. LAFC have scored in every home game this season and in every home game since August 22, 2020. But then Nashville has scored in 18-straight games and needs a win to try to jump the LA Galaxy for home field.

Philadelphia though is the weekend’s biggest favorite at -230 against Toronto. The Union are still fighting for top spot in the East.

If the expectation is Cincinnati won’t lose to the league’s worst team, then Orlando can’t be counting on drawing to make it into the MLS Cup Playoffs. They’ll have to attack and in Ercan Kara (11 goals) and Facundo Torres (8), they have the players to do so.

The Lions took a huge body blow to their playoff hopes when they lost 4-1 in Miami on Wednesday. That’s four losses in five, but Orlando has scored in 8/9 recent matches.

On Wednesday, @facutorresss set the Club-record for single-season goal contributions at 24 with his assist to Ercan Kara.

The Crew isn’t keeping anyone out of their net recently, having conceded a goal in five straight and in 10/12.  Away from home, they’ve been scored on eight matches in a row, and multiple times in six of those eight. So expecting them to keep a clean sheet now with Orlando’s backs against the wall, looks unlikely.

While a draw won’t do for Orlando if Cincinnati collects pints, it will for Columbus. And the Crew are the draw kings with 16, the most, in all of MLS. Caleb Porter’s side is 3-7-1 in their past 11. The playoffs should’ve been locked up a while ago if they could hold onto leads though. Columbus has given up 11 goals in second-half stoppage time which is an MLS record. They did so again on Wednesday, blowing a 2-1 lead in Charlotte in the 94′ minute.

“The only thing our players are thinking about is winning this next game. That’s it.”#Crew96 | #ORLvCLB pic.twitter.com/4TqRfh7lmn

I don’t trust either team to win here, both can score and concede and a draw could work for one or both. I’ll simply lay the juice and bet both to score. in my Decision Day MLS picks.

Both of these teams are fighting for the playoffs, the Loons, being seventh and the Whitecaps ninth. There is a path where Minnesota can jump as high as fourth.

Minnesota had a chance to lock up the playoffs last week in San Jose against an Earthquakes team simply playing out the stretch. Instead, they pulled a no-show and lost 2-0. But really, Minnesota’s playoff lives should never have been coming down to last week or Decision Day. A few more points at any point over the last month and they’d be home and cool.

However, Adrain Heath’s side has completely flat-lined to end the season. The Loons are now are on an 0-1-5 slide and haven’t won since August 27. To make matters worse, they’ve scored just twice in this six-game winless run, being shut out four times. Minnesota is also on a run of conceding a goal in 12-straight games. They’ve been without Robin Lod since September 13 and he’s questionable to play on Decision Day.

Decision Day is upon us, & it’s living up to its name.

The Loons need a win or a tie for a playoff spot, while Vancouver needs a win for that playoff spot.

Having this game at home at Allianz Field will be a boost as they’ve scored in 13/16 home matches this year. But even at that, their home record of 7-5-4 is among the worst in the conference.

While Minnesota is slumping, Vanni Sartini’s Whitecaps are surging. It may be too little too late, but they’ve done just enough (and had just enough results go their way) to be in a position to reach the playoffs on Decision Day. Vancouver has won each of their last three matches 3-0, 2-1 and then 2-0 last weekend at home to Austin. But, all three of those wins came at home at BC Place.

Two spots up for grabs on #DecisionDay in the West.

Hitting the road for this all-important match isn’t the best scenario, as the Caps are just 2-4-10 on the road and have been out-scored by 20 goals. They’re actually winless in seven away from home but have scored in seven of their past eight road dates. The road though has been a place where Whitecaps’ points go to die, as they actually only have four wins in 39 away games.

When these teams met earlier this year it was a 3-1 Minnesota win in Vancouver.

To me, this one sets up to see goals. Vancouver knows they need to win—nothing else will do. Minnesota could get in with a win or draw. All this game needs is someone to get on the board early and things could open up quickly. The moment either team falls behind they’ll be forced to attack and will either score or leave themselves open in the back, allowing for their opponent to counter-attack.

Here’s a two-team parlay from two games in the Eastern Conference for your Decision Day MLS picks.

The season is over for DC United, but they can play spoiler against an FC Cincinnati team looking to clinch their first trip to the MLS Cup Playoffs. They can play spoiler with a win, except DC has only won seven times all season and only once in their past 12 games. Wayne Rooney will want to end the season on a high note with his DC side, but I’m not sure they have the talent to do, scoring just twice in their past five games.

Cincinnati blew their chance at three points last week when they lost 3-2 to another eliminated team in Chicago. It was a deflating defeat and Cincinnati will need to rebound and pick themselves up on Decision Day. Lucky for them, even a draw will do, and Cincinnati is all about the draws, doing so 13 times in 33 games this season.

Last week’s 3-2 loss was their first in 11 games and only their second defeat in 19. During that 19-game stretch they were 5-12-2. Only one time during those 19 games did they fail to score a goal, though they also conceded in all but three. I’m backing them to at least draw this game on the double chance market for my MLS picks.

The Union can lock up first place in the Eastern Conference with a win. A draw would still mean Montreal could pass them if they beat Inter Miami. So there is still something to play for in Philly. There is not for Toronto. I was betting on pride last week for TFC and expected a better performance at home to Miami but they were shutout 1-0, their fourth-straight defeat. TFC allowed 12 goals in their three games prior, losing 4-0, 4-2 and 4-3. Overall Toronto has allowed the third-most goals in all of MLS.

The Philadelphia Union head into the final day of the 2022 regular season with their MLS Cup Playoffs spot long since secured, but with plenty left to play for. | Curtin wants his team to bounce back from their CLTFC defeat. | Kyle Ross-USA TODAY Sports#Sports #News From 90m pic.twitter.com/4eEtMbrxrQ

The Union had a shocker last week losing 4-0 in Charlotte, coughing up the chance to win the Supporters’ Shield. They’ve now been shut out in back-to-back games. But both of those were on the road. They’ll be back at Subaru Park where they are still undefeated at 11-5-0, outscoring their opponents 45-9. Philadelphia has scored multiple goals at home in each of their past eight and I’m backing them to do so again for this MLS parlay pick.

And to keep things interesting for the late kick-offs, here is another two-team for the West in our MLS picks.

Four teams are battling for the final two MLS Western Conference playoff places and these are two of them. Portland is the most comfortable of the four, sitting in sixth with 46 points. But because Portland only has 11 wins, Vancouver with 43 points in ninth with 12 wins, can still pass them out if they defeat Minnesota.

The Timbers lost last week, conceding a goal in stoppage time to LAFC to lose 2-1. It was their first loss though in five. But it extended a streak that has seen them score in 19 games in a row. That’s the good. The bad is that they’ve conceded a goal in 16 of those 19,

“Now we’ve got to come home next week and beat Portland.”#LAvRSL | @AFCU pic.twitter.com/cDYXaGvQq9

RSL is in eighth place on 44 points, which puts them one back of Minnesota and two back of the Timbers. A tie does them no good as they also only have 11 wins, so a potential tie on 45 points with Minnesota (13 wins) won’t go in their favor.

They’ve been tight defensively at home only allowing 14 goals in 16 matches, to go with a 8-5-3 record. However, overall they’ve slumped to the finish line going winless in five, with just a single win in eight.

If you’re not an LA Galaxy fan or a sports bettor, this Decision Day match may not seem like much. The Dynamo are long eliminated from playoff contention. But the Galaxy sits in fourth place in the West, which is the final home playoff position. They can still be jumped by Nashville, Portland and even Minnesota. Only a win guarantees home-field.

Needing to win doesn’t mean you will win though. LA already lost at home to Houston 3-0 earlier this year. Greg Vanney’s team has only collected three points twice in their past seven games. However, they’ve only lost once in their past ten. They can score though, something they’ve done in 10/11 recent matches.

Houston are 13th but they’re getting the dead-cat bounce to end the season at 2-1-1 in their past four. But Houston has kept just one clean sheet in 17 games. Let’s just back LA to score a goal for our MLS parlay picks.